A convenient way to understand social movements is to think of them as markets.

While social movements often seem mysterious, markets are well understood. At least they are in hindsight. There is a distinct emotional cycle a market participant experiences in response to volatility in the price of an asset. A rising price inspires feelings of happiness and excitement, while falling price evokes feelings of despair and regret. 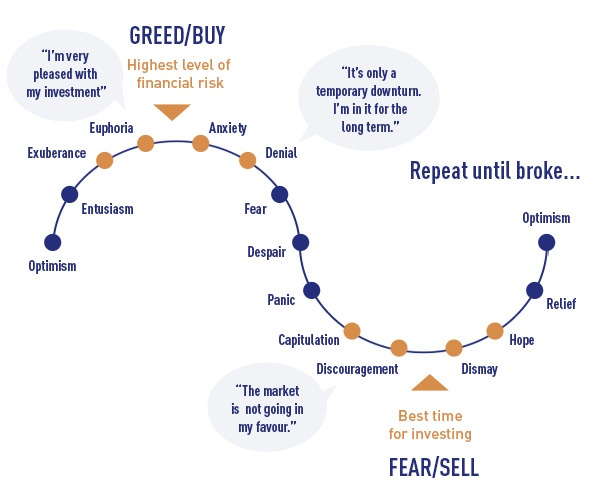 The emotional cycle of a market participant.

A social movement has a very similar dynamic. The asset being bought or sold is the idea behind the movement. Belief in the idea can be considered as taking a long position in the market, whereas rejection of the idea can be considered shorting the market. This notion of belief as a market is already embedded in everyday speech. If you think someone is lying to you, you tell them that you don't “Buy” it.

You value it in Power. A participant who supports the movement gains power as the movement spreads. For this reason, movements often catch on in segments of society where there is a high occurrence of disempowered people. Likewise, the strongest opposition to movements generally comes from the people who are the most threatened by it.

Each side of the movement goes through the same emotional cycle experienced by market traders. There is a continual shift in power as the movement rises, subsides, and changes form.

Who is euphoric? Who is in despair?

Answering that, we have found the seed of a great power.